This program is suggested for anyone that does not regularly exercise and whose work or daily activities do not create an active lifestyle. This level is also suggested for anyone whose visual posture is extremely poor in their natural standing or sitting position, regardless of activity level.

This program is suggested for anyone that does not actively strength train but who exercises regularly or whose work or daily activities create an active lifestyle.

This program is suggested for anyone who actively strength trains at least 3-4 times per week or who is considered an athlete. However, if posture is visually poor, beginning with Posture Medic Plus but following the INACTIVE is suggested to begin posture training. This can address the possibility of tightened pectoral muscles in the early stages. 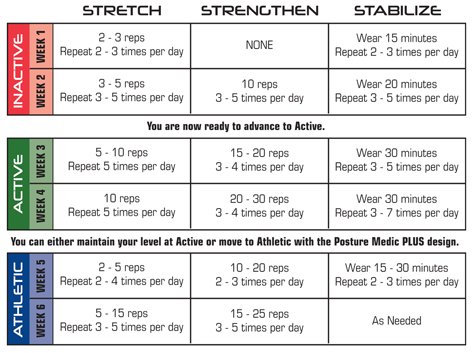 — 75% of the population should begin with the Original Strength before advancing to the Plus Strength.
— Obese individuals may require the Plus Strength regardless of activity level to support bulk in the chest area.

Every BODY Needs One